The Eisenhower Drive Extension Project achieves environmental clearance with FHWA’s issuance of a Finding of No Significant Impact (FONSI) document.

FINDING OF NO SIGNIFICANT IMPACT: The Pennsylvania Department of Transportation (PennDOT) District 8-0 and the Federal Highway Administration (FHWA), in cooperation with the United States Army Corps of Engineers (USACE) conducted a Joint Public Hearing on February 23, 2022 for the Eisenhower Drive Extension Project in York and Adams County. The hearing was conducted as a part of the 45-day comment period on the Environmental Assessment (EA) and Draft Section 4(f) Evaluation Document. The public review and comment period began on January 24, 2022 and ended on March 10, 2022. All comments received during the comment period have been reviewed and addressed and are included as a part of the Finding of No Significant Impact (FONSI) Package. FHWA issued the FONSI on January 3, 2023. The FHWA approval of the FONSI and overall FONSI Package, including the Public Hearing material and responses to comments, are available through the links below.

According to Section 4(f) of the U.S. Department of Transportation Act of 1966 (23 CFR Part 774) and PA Act 120 of 1970 (Section 2002 of the Administrative Code of 1929), the use of publicly-owned parks, recreation area, and wildlife/waterfowl refuges, as well as public and private historic sites for transportation purposes may only occur if no feasible and prudent avoidance alternative to such use exists and if the project includes all possible planning to minimize harm to resources from such use. The Eisenhower Drive Extension project area included both historic properties and recreation areas. The Section 4(f) Evaluation Document analyzed impacts to Section 4(f) Resources within the project area and demonstrated how the Preferred Alternative results in the least overall harm to project area Section 4(f) properties, and included all possible planning to minimize harm. 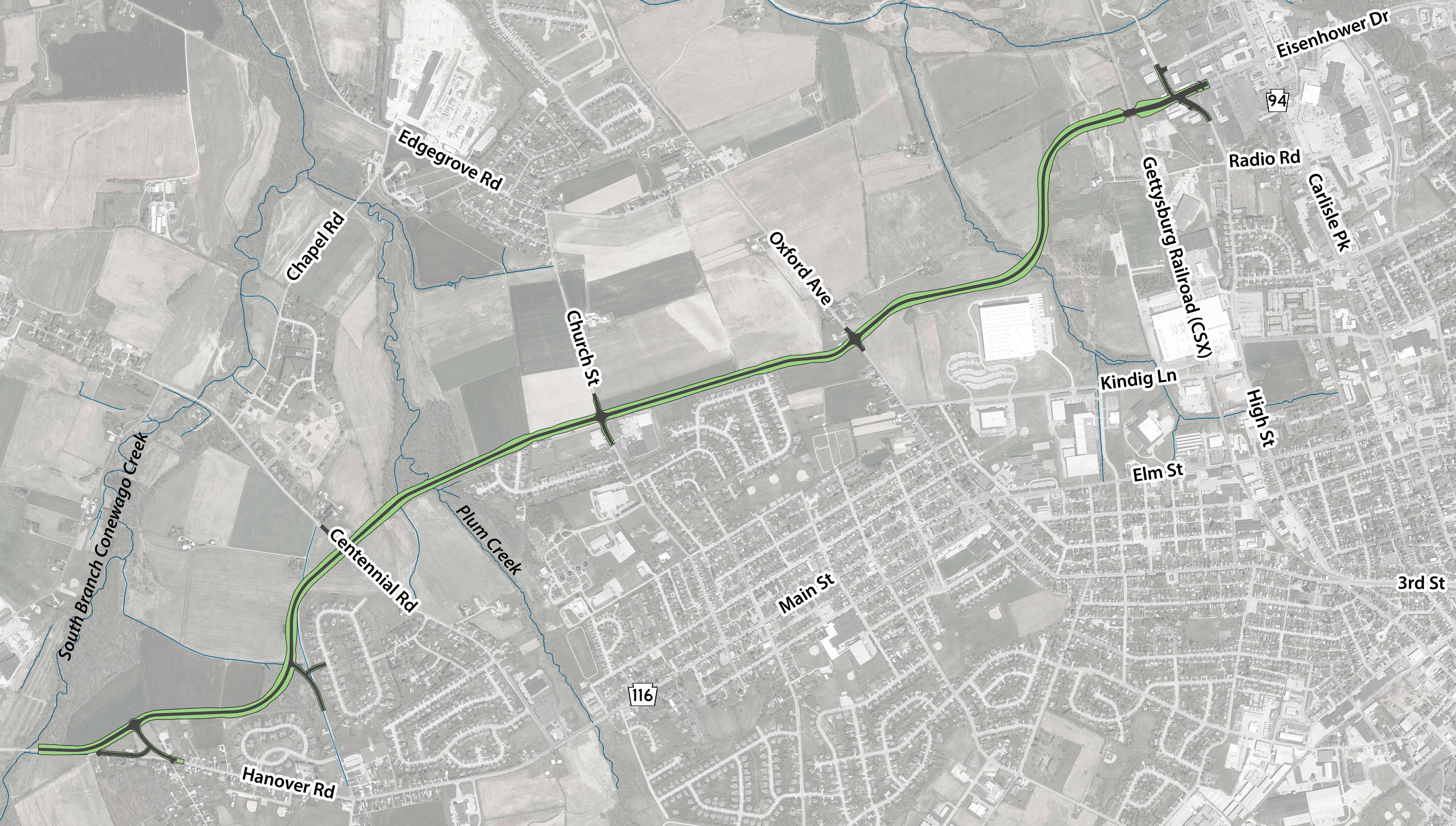 This project involves extending Eisenhower Drive through Conewago Township, from where it currently ends at High Street to Hanover Road (SR 116) west of McSherrystown.

In 1997, the Hanover Area Transportation Planning Study was presented to PennDOT. This study included several key projects, including a proposal to extend Eisenhower Drive which could help address the growing transportation needs in the area.

In 2011, Adams County issued the Eisenhower Parkway Study, which was a local planning effort to identify potential new alignments for Eisenhower Drive.

PennDOT re-initiated the project in November 2014 and are moving ahead with the required environmental studies and preliminary design efforts.

The primary purpose of the project is to facilitate safe and efficient travel for vehicles, bicyclists, and pedestrians through the study area. Improvements will reduce congestion, improve safety, accommodate growth, and reduce the impact of truck and commuter traffic on existing roads.

The secondary purpose of the project is to provide a modern roadway that promotes and enhances multi-use alternatives, such as bicycling and walking, within and surrounding the study area.

Eisenhower Drive and S.R. 116 travel corridors are the main traffic corridors through McSherrystown and Conewago Township, Adams County, and serve as a primary east-west link between Penn Township / Hanover Borough and destinations west of McSherrystown.

SR 116 and SR 94 in McSherrystown and Hanover are congested to the point that they are unable to efficiently move traffic, especially during morning and evening rush hours. In fact, conditions are bad enough that they are labeled “unacceptable” in traffic analyses; characteristic include roads in constant traffic jam, incidents cause significant delays, and unpredictable travel time. Conditions are particularly poor in McSherrystown. As of 2017, S.R. 116 carries 16,100 vehicles per day through the Borough of McSherrystown. The existing two-lane roadway is already near capacity, and traffic volume is expected to grow to 19,200 vehicles per day by 2040. If no improvements are made to the transportation network by then, it will take more than 5 minutes just to turn onto or cross over SR 116 from one of the side streets in McSherrystown.

The crash rates for most roadways in the study area, and particularly along SR 116 and SR 94, are higher than the statewide average rates for similar roadway types. Accidents include rear-end and angled crashes, crashes involving pedestrians, and several crashes resulting in fatalities. Emergency vehicles have a hard time responding to incidents due to the lack of space for cars to move out of the way and disabled vehicles along SR 116 and SR 94 have very few places to move out of the travel lanes due to narrow shoulders, no median, or unrestricted on-street parking.

The study area has various environmental features. Several streams and associated wetlands and floodplains are the main aquatic resources in the project area: South Branch Conewago Creek, Plum Creek, and an Unnamed Tributary to South Branch Conewago Creek. A large portion of the study area consists of productive agricultural lands, including Agricultural Security Areas. There are several historic resources that are listed in, or eligible for listing in the National Register of Historic Places, including the Hanover Historic District and several historic farms. A large portion of the project area contains a high probability for historic or pre-historic archaeological resources. The CSX Railroad is located along the east side of the project area with trains running two to three times daily.

Several public and parochial schools are located within the study area. There are no hospitals, but there is one elderly care facility located in the west end of McSherrystown. High-density residential neighborhoods are primarily located in the southern portion of the study area. Additional residential neighborhoods occur within the northern portion of the project area adjacent to agricultural lands. Rabbittransit, the York Adams Transportation Authority, features three main fixed bus routes that serve the Hanover area and run within or adjacent to the project area. There are no established bike routes located within or immediately adjacent to the project area; however, sidewalks are available for pedestrians within McSherrystown and Hanover Boroughs.

Thank you for visiting the Eisenhower Drive Extension Project Website! Please check back for more details and project updates.

If you have questions regarding the Eisenhower Drive Extension Project, please submit your inquiry.